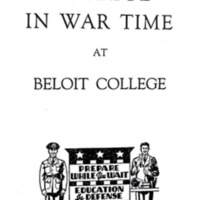 The students at Beloit College were affected by the war both overseas and back home. During the war, Beloit College changed their academic structure in order to incorporate a more military based education. This allowed students and service men to obtain their degrees at an accelerated pace so the service men could go off to fight in the war at higher rankings within the military.

While military trainings were focused around the service men of the 95th College Training Detachment, the social lives of all students were altered to focus around the military in a variety of ways such as calisthenics, bond sales, and dances for visiting soldiers.

This exhibit shows the changes that were made to both the academic and social lives of Beloit College students during the war.