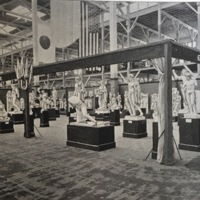 The Greek Casts were acquired from the Greek government after being exhibited in the World Columbian Exposition that was held in Chicago in 1893. They were acquired with the help of Helen Brace Emerson and L. G. Fisher. Once acquired, the casts made their first home in the second Art Hall, in the old South College, and were dubbed “The Fisher Collection”. Of the original 112 plaster cast replicas, only 25 remain in the Wright Museum's catalogs. With most of the casts unaccounted for, either missing, sold, or destroyed, the collection is currently in much worse shape than when it was first debuted.